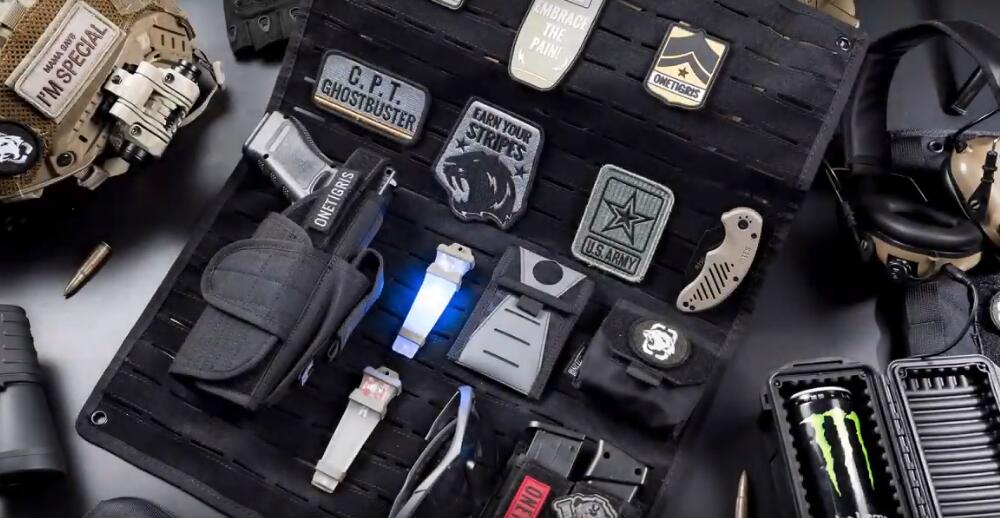 So after using this organizer for about a month, I have to say, I really enjoy it. A LOT! It looks great up on my wall, keeps things nice and organized, and makes selecting my EDC very easy, while keeping my plastic dump tray free of clutter, and used only for my wallet, phone, and glasses.

I'll go over my thoughts and observations.

1.)  It is built tough. I grabbed each side, both length wise and width wise, and pulled. HARD! Over and over. None of the stitching popped, there were no tears, and nothing seperated. The Cordura fabric held up great. A+ for construction material. Over the course of this past month, I've attached, clipped, hung, strung, threaded, and velcroed all sorts of items to this panel, in different configurations. There is no visible "wear and tear". Looks just as good now as when I got it. All the stitching is still tight, with no broken threads. The fuzziness of the soft felt back still grips morale patches perfectly, and has not shown any sign of bunching up into little felt balls. I absolutely love this thing. Keeps my stuff organized, and I like playing around with different configurations, and attaching different items. I will have to buy another one, because I simply have too many patches and "stuff" to attach to one single panel! Haha

2.)  I'm sure this was just a fluke, since this was a first run prototype, but upon receiving this item, my panel had this jumble of loose thread, dead center of the entire panel.

I easily covered it up with a morale patch, and it in no way affects the construction of the panel itself. The stitching is solid, both front and back. It is simply some extra long, excess thread. Almost like the end of a bobbin fell in the way of the machine while that line was being stitched. Again, I'm sure this was just a strange fluke, being a prototype and all. It does not affect the construction whatsoever. But just something of note. 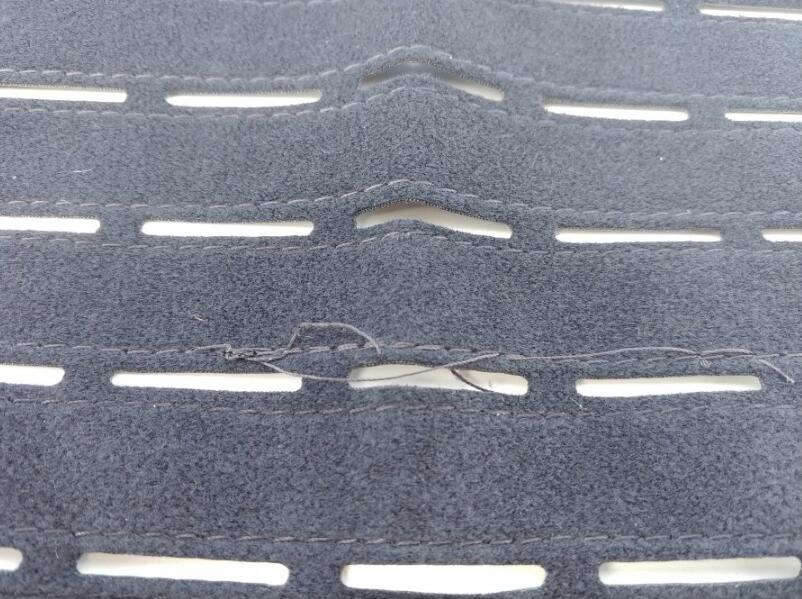 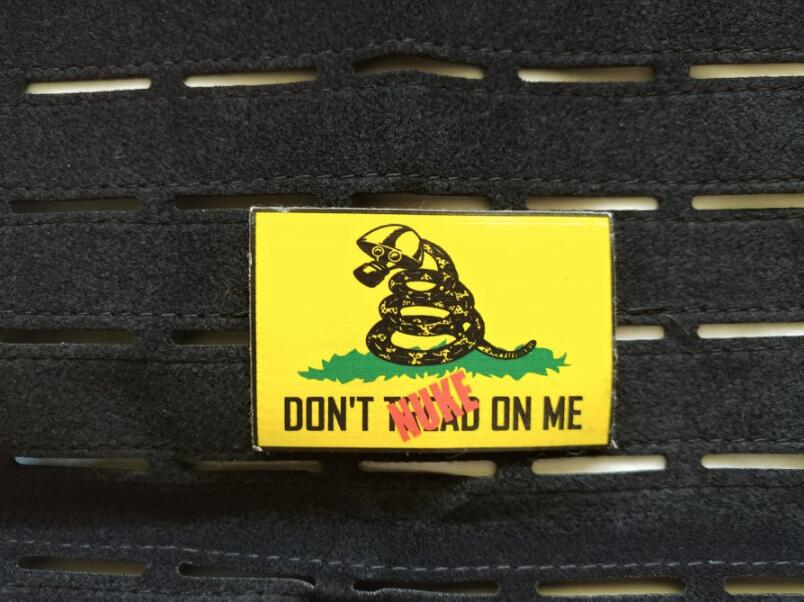 3.) Now this next bit might be due to my background in construction:
I tried to get a clear picture, but I noticed the spacing of the holes are over 16 inches apart. Why is this important, you might ask? Because most of the wooden studs inside our walls (if the house was framed correctly) are spaced 16 inches apart, center to center. If you're putting a bunch of weight on this thing, and vibrating the panel when you clip and unclip items every day, you don't want it to one day rip the nails or screws out of the drywall. I located the stud in my wall, and drilled my screw into the upper right corner, no problem. But when I pulled the patch panel tight, and drilled for the upper left hole, I did not hit a stud, only drywall. 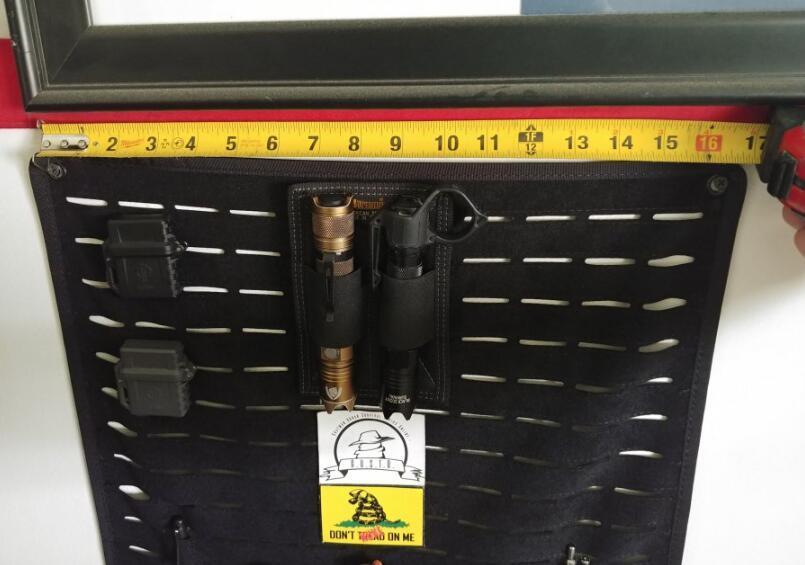 Now, this may not seem like a big deal, but if you notice in my picture, that water bottle is full of water. As part of my test, I did a load bearing stress tess by leaving that water bottle on there for a couple of weeks. If I hadn't anchored into the wall stud, I'm not sure what would have happened, but because I had at least 1 screw in a stud, I'm happy to report, no issues. The patch paneldid just fine under all that weight

4.) An observation, which personally doesn't bother me whatsoever, since this is more an aesthetic change/idea, but some people may not want to be able to see their walls through the laser cuts in the webbing. Maybe add some sort of black backing material, that is only stitched around the outside edge, so as not to interfere with the function of the Molle? Basically make this panel "double layered". Maybe the extra layer will help "stiffen" up the panel, and resist any potential sag over long term usage. Again, just an idea, and mainly for aesthetic reasons, because some people can be really OCD/picky like that. Haha.

Overall, I think this is an excellent item. I will more than likely pick up another one, because I have SO many patches, and "stuff" that would look great on these panels. The panel works great in keeping things organized. It is built SUPER strong, and it is just plain fun to set up all your stuff and customize where everything is. The ability to organize your "stuff" on a vertical surface (wall) means your table, desk, dresser, or wherever else you keep your "stuff" at will be less cluttered. And it is just plain cool to have a bunch of your favorite items at eye level, layed out in front of you in a nice orderly fashion.

Posted in Gear By